Stories from my Past: Avoiding life by not allowing risk

As a kid I did lots of risky things. It is amazing I am still alive. 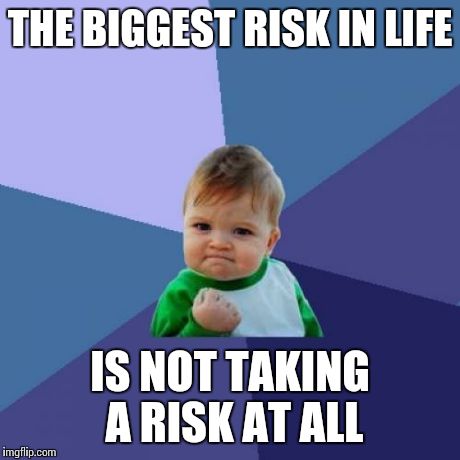 This is not to brag, but rather to share something that I see is a concerning trend. I see lots of children who are so engrossed with their iPad that they aren’t outside having fun, and it is so different than than childhood I had.

In some ways I think people are avoiding life by not allowing risk for their kids. I grew up in the 70’s and that culture was very different. I would do all kinds of things as a kid which I know wouldn’t be allowed now. I hurt myself sometimes of course but I am glad that I had the freedom to hurt myself. I would be a much more afraid person if I hadn’t.

For example I liked to walk barefoot and that meant that sometimes I would get nails, glass or other things poke my feet. I don’t like pain and I don’t like those experiences, but I was also happy to be able to feel the mud and earth beneath me. I hate shoes, and I only wear them because society requires them but if I had my choice I’d be at home barefoot. No not pregnant, so I could be barefoot and pregnant but it is not a bad deal.

Another time I shared I almost cut off my thumb. I almost also caught myself on fire, repeatedly electrocuted myself, falls from various heights and broke bones and other things. I was a sickly kid so I had asthma and I had to stay away from things that I was allergic too. So when I felt healthy I did everything that I could to enjoy life.

Now I watch documentaries and see children who’s parents are afraid to let them play outside. I see children who are more focused on ipads than the more interesting world around them. I see parents who use ipads as a substitute for their attention and love. I hate iPads and I would hate to imagine my childhood with a dumb ipad instead of those adventures.

Yes I hear you saying the world has changed. Yes it has. I don’t think people change though. I don’t think the world is any more fundamentally dangerous than it was then. It is true that I was lucky. I had health care when I got sick. I know that not every family has the resources to get medical attention when their children get injured. I can understand why it is cheaper to sedate children with an iPad then let them risk getting hurt.

Don’t misunderstand. I don’t want children to be hurt, and I don’t enjoy feeling pain or getting hurt. However in life, you take the helpful with the unhelpful. If you expose your children to reasonable risks, you help them grow in confidence in their own ability to handle life. I saw with my classmates that the ones who’s parents were overprotective they felt unable to cope with the world.

I don’t pretend to have all the answers, but I know that for me I would rather die from injuries like old Captain Picard than live a life of a safe ipad existence. Give your children more than an iPad. Give them a reason to live and take reasonable risks.

Mobile home considered poor but RV is considered richStories from my Past: Dealing with car repair